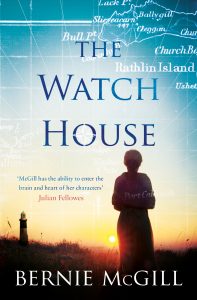 ‘Beautiful and lyrical, tender and fierce; one of those rare novels, with the power to break you clean in two.’ Guinevere Glasfurd, author of the Costa shortlisted The Words in My Hand.

‘McGill writes about life, love and telegraphy with a poet’s clarity’ The Sunday Times

‘McGill proves once again she is a masterful storyteller . . . historical fiction at its absolute best’ The Lady

‘A novel to haunt you’ Sunday Mirror

‘The Watch House, set on Rathlin Island at the turn of the 20th century, [is] awash in old rituals and impending transformations, in loyalties and enmities and all manner of local witchery’ Patricia Craig, Irish Times Books of the Year

‘The book is a masterclass in how to marry narrative and setting.’ David Park, Irish Times

‘Hard to put down, this atmospheric book will stay with you long after the final heart-rending denouement, setting McGill firmly into the panoply of modern Irish writers’ Irish Independent

‘There are messages in the air, a closeness like the kind that comes before a storm, a listening, a holding of breath.’ It is summer, 1898, on the small Irish island of Rathlin and the place is alive with gossip. A pair of strangers has arrived from the mainland, laden with mysterious radio equipment, and the islanders are full of dread. For native Nuala Byrne, abandoned by her family for the New World and trapped by a prudent marriage to the island’s ageing tailor, the prospects for adventure are bleak. But when she is sent to cook for Marconi’s men and is enlisted, by the Italian engineer Gabriel, as an apprentice operator, she becomes enthralled by the world of knowledge that he brings from beyond her own narrow horizons. As Nuala’s friendship with Gabriel deepens, she realises that her deal with the tailor was a bargain she should never have struck.

The Watch House is a gripping story about the power of words to connect us, and the power of suspicion to drive us apart.

The Watch House on Amazon.